Iliotibial Band Syndrome is a common overuse injury seen in runners and cyclists, presenting as pain on the outside of the knee. It accounts for upto approximately 22% of injuries amongst runners and upto 24% of injuries amongst the cycling population (therefore triathletes beware!!). Poor biomechanics, weak and poorly activated muscles and over training contribute towards the onset of symptoms.

Traditionally, ITBS was thought to be as a result of the Iliotibial Band (ITB) repeatedly rubbing over the lateral epicondyle (bony prominence) of the thigh bone on the outside of the knee. More lately, research has proposed that a highly sensitive layer of fat and connective tissue lies between the ITB and the femoral condyle and this is likely to be the source of the pain. Either way, the condition normally responds to conservative management and rest. 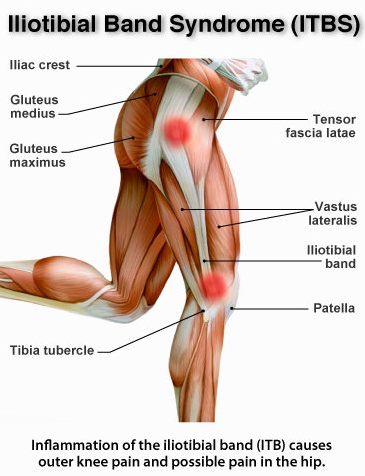 Usually, a person with ITBS complains of pain around the outside of the knee whi lst running/cycling. The onset of symptoms are usually very consistent and will occur at the same time/distance into a run or ride. i.e a runner might complain that she experiences her pain after exactly 17 minutes on the treadmill, or a cyclist might experience discomfort after cycling for 8 miles. Running downhill or on uneven surface usually causes most aggravation of symptoms, as does longer training sessions.

How is it diagnosed?

A physiotherapist or other qualified health professional will normally be able to diagnose ITBS by performing a few diagnostic tests. Repeatedly bending the knee backward and forward can elicit pain, particularly at approximately 30 degrees knee flexion. A test called the Obers test or Modified Ober’s test is performed in side lying which detects a tightness or restriction in the ITB. A significant restriction or pain on performing this movement can confirm the diagnosis. Palpation of the iliotibial band insertion will usually be uncomfortable and often will reproduce pain similar to the pain you experience whilst running/cycling. Noble’s compression test also elicits pain by palpating the distal ITB whilst straightening the knee from a bent to a straight position.

As with any overuse injury related to running, the key to the management of ITBS is prevention in the first place. Therefore the top risk factors for developing this condition and what you can do to prevent it are highlighted below. If you are already experiencing symptoms of ITBS try these management solutions(in conjunction with relative rest) as a means of treating the symptoms.

This appears to be the most common biomechanical risk factor for developing ITBS. Weakness or inactivity of the hip abductors can result in a lateral pelvic tilt and increased hip adduction (hip and knee deviating inwards towards the midline). This is thought to cause excessive strain of the ITB. Studies have shown that runners who present with ITBS often have weak or poorly activated gluteals and poor ability to control hip adduction during running.

Stand on a step with one foot off the side, holding a pole or chair.

Slowly lower your hip and leg towards the floor.

Slowly lift your hip towards the ceiling as high as possible without letting the other hip drop out.

Start in a squat position with a band around your ankles.

Keeping the band taut at all times, step to the side.

Push the knees out while taking the steps so they don’t cave in.

Each step is about 50% of the starting position stance.

Begin in side lying with a band around your knees.

Your knees should be straight and your legs should be slightly behind your body (slight extension).

Lift the top leg to abduct the hip, making sure you start the movement with the band already taut.

Do not move your leg forward as you lift and do not rotate your foot up.

Lay on your side with a band around your thighs, just above your knees.

Your hips should be flexed slightly and your head supported.

Keep your feet together and open the top knee to externally rotate the hip.

2. Poor activation/strength of lateral flexors at the trunk

When you plant one leg, if the opposite lateral flexors of the trunk aren’t firing properly or are weak, then this side of the pelvis will drop. This can cause the pelvis on the planted leg to shift upwards, which in turn can put additional strain through the lateral hip structures and ITB.

Solution: Try the hip hike exercise as highlighted above. Or Side Plank (Below)

If possible try and run whilst looking into a mirror. Imagine a spirit level from one pelvis to the other. Try and prevent this dropping side to side too much

Lie on side with legs straight and in line with body.

With your upper body supported on your elbow, make sure the elbow is directly under the shoulder.

Lift your pelvis creating a straight in line with your body.

Stabilize and then lift top leg and arm upwards, keeping your body straight.

Maintain the position and repeat.

The shin bone is where the lower part of the ITB inserts. Put simply, if the shin bone turns inwards, this puts additional stress/compressive forces on the ITB. Studies have demonstrated that runners who present with ITBS often have an increased internal rotation of the tibia.

Solution: see the gluteal exercises above. Try and run with feet facing forward.

An inadequate function of the main hip flexor muscle (iliopsoas) can result in a compensatory activation of the tensor fascia lata (TFL) muscle. If this is repeated over a sustained period, the TFL can become shortened and tight. The TFL muscle blends into the ITB, so if the TFL becomes short and tight, this will reproduce a pulling on the ITB insertion.

Solution: Myofascial release and stretches to the TFL. Activation of the hip flexors (see link below)

Stand next to wall with involved leg toward wall. Cross over the uninvolved leg in front and push your hips towards the wall until you feel a stretch on the side of your thigh and buttocks.Keep the foot of the stretched leg pointed forward or, if possible, slightly toward the wall.

Poor eccentric control of knee extension by the hamstrings has been shown to correlate with an increased incidence of ITBS, however the evidence for this isn’t great. If the ability of the hamstrings to control extension (decreased braking forces) is compromised, the runner may be subject to more uncontrolled movement, increasing the likelihood of developing ITBS.

Begin in high kneeling with a cushion or a rolled-up towel under your knee and have a partner grab your ankle or hook your feet under a stable base.

Flex your ankle so you have the tips of your toes on the ground.

Keeping your thighs in line with your torso, bend forward, hinging at the knees.

Feel the contraction in your hamstrings and hold.

Go as far as you can before cramping or pain.

If it looks like you are running on a tightrope, it is likely you have a cross-over running style. With a cross over running style the distal insertion (lower part) of the ITB is taken further away from the origin (Higher part), causing an increased strain on the ITB

This can be as a result of weak abductors not controlling hip adduction again, causing the hip to move towards the midline. This again will often coincide with a drop of the pelvis on the non stance leg.

Consciously attempt to widen your stride whilst running. Think of 2 parallel lines in front of you when run approximately 10cm apart. When you run, ensure your left leg stays on the outside of the left line and your right leg stays outside of the right line.

A non neutral footstrike particularly over pronation of the Rearfoot can cause the knee to move to move towards the midline, putting additional strain through the ITB. Over the counter anti-pronation insoles can be bought to reduce pronation. It is advised to seek an appointment with a podiatrist/orthotist to address these issues.

Solution: It is always advised to only increase your weekly mileage by 10% each week. Incorporating some uphill sprint sessions into your weekly program may prove to be beneficial. Although, it is outside of the remit of this article, having a well activated and strong core is vital in the prevention of lower limb overload injuries.